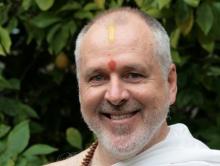 Sri Vasudevacharya (Michael Comans) is a direct disciple of Swami Dayananda. He teaches, principally in Melbourne and Sydney, and has provided courses on the Bhagavad Gita, the principal Upanishads and Sanskrit.

Sri Vasudevacharya’s journey in spiritualism started when he started his studies under the guidance of Swami Dayananda from 1980 to 1983, in Chinmaya Mission Ashram. He returned to Australia in 1983 and completed his Doctorate in Classical Indian Philosophy at the Australian National University in 1987. After his PhD, Acharya served as a faculty of Sanskrit in the Department of Indian Studies at the Sydney University.However, in 1995 he realized that his interests were “really spiritual and not academic”. In 1998, his guru named him Vasudevacharya and gave him diksha. Since then he has been teaching the Bhagavad
Gita and the Upanishads full-time to the general public.

Vasudevacharya is the first person in Australia to have taught the entire Bhagavad Gita to the general public. He commenced a Bhagavad Gita Jnana Yajna in March 1996, at a function inaugurated by Swami Dayananda Saraswati, and through regular weekly classes he concluded the teaching of the eighteen chapters in October 1997. Since then he has been teaching Bhagavad Gita and Upanishads across Australia. He has been delivering lectures in other countries including India.

In Australia Sri Acharya has a large number of devoted shisyas of articles and books on Advaita Vedanta, the recent being The Method of Early Advaita Vedanta (Motilal Banarsidass, 2000). He has also composed an Advaita treatise in Sanskrit titled Advaitapratibodha. Sri Vasudevacharya is known for explaining Vedantic concepts using simple language and through these concepts he demonstrates how spirituality is a part and parcel of everyday life.